The Baltic Exchange Investor Indices (BII) to date are less noted in the shipping and mainstream press than the Baltic Dry Index (BDI). This may be an oversight.

For background, the BII are an easy-to-use online analytical dashboard displaying data relevant to vessel investment decisions, residual value, health of earnings, spot and implied five-year timecharter earnings, second-hand (five-year-old) purchase & recycling values, and running costs. They offer a high level of clarity and transparency for dry bulk investors in Capesize, Panamax, Supramax and Handysize vessel types. In the future, newbuilding to recycling full lifespan of the vessel will come and the Baltic Exchange plans to publish similar indices for tankers.

The BDHEI is an index representing the ratio of earnings against running costs. A negative number indicates that earnings are below operating costs as assessed by the Baltic Exchange. It is a composite of average health of earnings of Capesize (CDHEI), Panamax (PDHEI), Supramax (SDHEI) and Handysize (HDHEI) vessels.

A gulf between asset values and freight rates over trailing 12 months
As may be expected, the BDHEI is almost fully correlated to the BDI at 0.98x. However, as one can see from the above graphic, over the last year the correlation between the BDRVI and the BDHEI is negative at (0.56x).

It’s important to remember that correlation (or, in this case negative correlation) does not imply causation. However, the fundamental reason for this negative correlation is clear: While earnings have predominantly fallen in the dry bulk sector over the year, asset values have been stable to rising. A five-year-old ECO Cape was ~$46M a year ago and today it is ~$47M while freight rates have dropped dramatically over the year. While five year freight rates (with which the BDRVI is calculated) have fallen supporting calculated residual value, the fall in rates has not been followed by an equivalent fall in asset values, yet. While shipping asset values and freight rates often lag each other, the current gulf is pronounced.

Despite near term uncertainty, the longer term appears attractive to investors
This condition has not been lost on the market and is not big news in itself. However, the US dollar has risen, inflation is steep in many parts of the world, China is working to add liquidity to its economy and there is war in Ukraine: The macro-economic conditions today are daunting and, in some cases, unprecedented. Despite these conditions, those buying bulkers in today’s value/freight environment are betting that freight rates will recover substantially over the next few years in order to justify the valuations of today.

That bet may well be a good one. The dry bulk order book is at ~7%, historically low. As well, shipyards are very busy with containership contracts (though that pace is slowing) so the pre- delivery period for an order today is ~30 months (if not longer). So if one wanted to order a bulker now, it appears challenging to get delivery in time to experience the full dry bulk market recovery. Additionally, propulsion options and environmental requirements have made ordering more complex. These supply conditions support the value of bulkers on the water today.

There is other relatively positive news for bulkers. There has been a draw of iron ore inventories at Chinese steel mills, just as the Chinese are beginning to stimulate the economy. Tightening carbon emission requirements will continue to favour the chartering of modern tonnage while older tonnage may need to power down further (reducing fleet capacity) to meet emission standards.
Also interesting: Recycled (a.k.a. scrap) steel prices may remain firm over time, as recycled steel is ~70% less carbon intensive than producing steel from iron ore and coal, encouraging the recycling of inefficient ships that may otherwise may not have reached their traditional, historical terminal age.

Handy and Capes bracket the sector in this case
The indices that make up the BII are a composite of the same indices for the Cape, Panamax, Supramax and Handysize sectors. In each of the four cases, at present, there is a negative correlation between the respective Health of Earnings Index and the Residual Value Index.

Calculated Cape residual values (CDRVI) to the health of earnings (CDHEI) has a negative correlation of (0.38x). The CDHEI is negative (84%) year on year, the CDRVI is up 58%. As the residual value index takes account of the five year TC rate, some of this is explained in the calculation. To put into some context, while the Baltic Cape Index is negative (77%) year on year, five-year-old Eco Cape asset values are up 2%.

Meanwhile, calculated Handysize residual values are the most negatively correlated at (0.66x). The HDRVI is up 111% while the HHEI is down (58%) year-on year. To compare with traditional metrics, five-year-old Handysize values are up ~8% while the BHSI is down (49%). 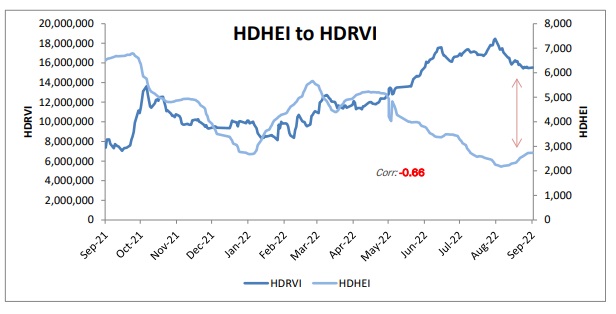 The above has some logical explanations. Smaller geared vessels have historically lower volatility in freight rates and their trades are more varied when compared to Capes. Also, some believe that the Handysize fleet may shrink faster in the coming years due to a modest orderbook, and given that Handysize vessels are older on average than other sectors with more annual port calls.

In time, freight rates will move to justify values, or, the other way around.

In the end, something has to give: Reflective of the calculated BDRVI, dry bulk ship buyers today believe freight rates will eventually justify today’s values. If not, the opposite will eventually be true and second hand values will fall. That may sound non-committal, because it is: Shipping is deeply cyclical due to the long-lived nature of ships, but the market can be as jagged and as sharp as shark’s teeth within the cycle. Also, the shipping demand side is much harder to handicap than the supply side.

Paraphrasing a common 19th Century maxim, “There are three types of lies: Lies, damned lies and statistics”. While the above speaks volumes about investor sentiment overall despite weak rates recently, shipping industry variables are myriad, from macroeconomic import data to local weather, from the attributes of one vessel’s performance to the global efforts to decarbonize.

Historically, shipping data has often been unreliable, intermittent, poorly consolidated, not uniformly collected and/or opaque. This should not be the case: data is a fundamental foundation of how all industry will evolve in the 21st century. In keeping with its long history of data consistency and uniformity, The Baltic Exchange Investor Indices seek to enhance data insights into our industry.
Source: Baltic Exchange