Shipping finance has shown its first signs of growth during the past year. The Petrofin Index for Global Ship Finance which commenced at 100 in 2008 is up by 1 point (from 62 in 2021 to 63), showing a rise for the first time in eleven years. According to Petrofin Research’s annual report, issued yesterday, the top 40 Banks’ lending to shipping in 2021 is higher at US$290.12bn from $286.9bn in 2020. 3. Asian and Australian banks (APAC) show the only growth, from $100.85bn to $114.75. APAC increased their share of the Global Portfolios from 35% to 39.5%. European banks’ share declined further by US$9.78, 5.8% yoy. Within Europe, the big decline continues by German banks although the trend has slowed down. Greek banks showed a yoy growth of 14.2 %, whilst Scandinavian banks continued their overall decline deemphasising lending in favour of use of their services to shipping.

“According to Petrofin Research, we can provide a cautious, indicative figure for global shipfinance, including all forms of lending, leasing and alternative providers, of approx. US$500bn. The total global bank lending of all banks, including local banks, amounts to approx. US$340bn, i.e. approx. 2/3 of the global ship finance total. There is increasing evidence that due to the Russian invasion of Ukraine,
together with the high energy prices, geographical sanctions, higher interest rates, slowdown in global growth and concerns over an incoming recession, bank lending in 2022 has been disrupted as caution prevails amongst banks. The Chinese selective lockdowns and economic slowdown has added to the above concerns and is having a temporary impact on Chinese leasing as well”, the report noted.

In its analysis, Petrofin Research said that “as 2021 developed and Covid-19 restrictions waned, the global economy’s GDP recovered from -3.1% to +5.9% yoy, seaborne trade from -3.5% to +4% yoy, whilst fleet growth was limited to a 2.9% increase. The above turnaround was assisted by continuing central banks’ monetary easing, low interest rates and a resurgence of demand for goods and commodities leading to increased congestion and fleet inefficiency. As a result of these developments, charter rates across most sectors (except for tankers) shot up by 50% for LNGs, up to 185% for dry bulk and multifold for Containers (Clarkson’s statistics). Vessel values followed suit, whilst scrapping decelerated. All in all, a remarkable turnaround. Banks, under the above favourable conditions and prospects, faced increased demand for loans, as well as competition from other non-banking lenders”. 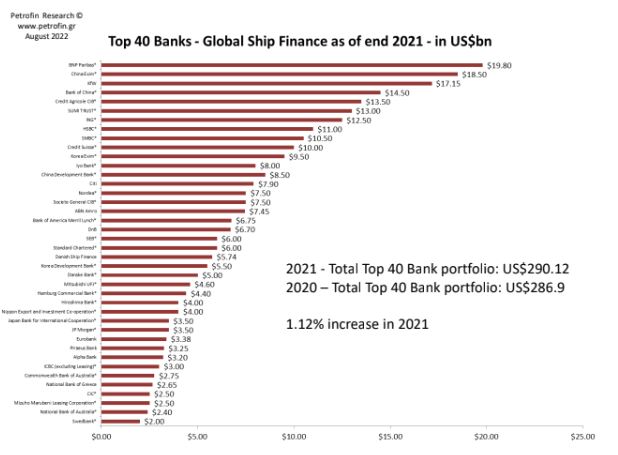 The report noted that “global bank lending showed limited growth. Based on the latest Petrofin Research ©, Graph 1 ranks the Top 40 ship financing banks’ portfolios, which collectively as of end 2021 year end stood at US$290.12bn, i.e. an increase of 1.12% yoy. This growth may appear small but it does represent the first rise since 2011. New bank lending was robust in 2021, especially towards the second half of the year. However, it should be noted that the newbuilding order book, which stood at 200m tons DWT at the end of 2020, fell to 177m tons at the end of 2021, but rose to 219m tons on 30/06/2022 (Clarkson’s). The Petrofin Global Index (Graph 2) shows the development of ship finance against the growth of the global fleet from 2008 to 2021. The long decline in ship finance loans was mainly due to the departure of many large ship finance European names over the period. This withdrawal process seems to have run its course. 2021 bank lending marks a well awaited recovery”.

“However, compared to the growth of the global fleet, it is self-evident that such growth was not mainly financed by banks but by non-banking relevant sources of finance including private fleet cash flows and owners’ liquidity. Within the Top 40, 21 banks are European based, 16 Asian/Australia based, and 3 North American based. European banks still hold the lion’s share at US$157.22bn. European banks’ share declined further from 58% to 54.19 %. Within Europe, German and Scandinavian banks’ share continued to decline, whilst Greek banks showed a yoy increase of 14.2%. Relative newcomers / small banks such as Bank of Cyprus, Hellenic, Pareto, M&M bank, etc. grew during 2021 and provided plurality to the available sources of bank finance. It is envisaged that total shipping related bank loans for all banks, including numerous domestic banks across the globe, which are outside the scope of this research, as of the end of 2021 is estimated at approximately US$340bn. An estimate of global ship finance exposure would include all forms of direct or indirect finance. Such an exercise needs to be approached with caution as there is a scarcity of information, especially from Asian leasing companies and banks, as well as for lending Funds on a bilateral basis. As an indication only, however, according to Petrofin Research ©, the total global ship finance exposure including leasing and all other forms of finance at the end of 2021 amounted to approximately US$500bn, by which total global bank loans accounted for approximately 2/3 of the total”, Petrofin Research concluded.
Nikos Roussanoglou, Hellenic Shipping News Worldwide