The continued release of capacity, combined with weak demand, continue to fuel the market downturn.

In terms of capacity the latest data covering the period until end-August shows that bottlenecks continue to improve in the liner shipping network. It is literally a matter of “glass half full or glass half empty”. The problems peaked in January 2022 where 13.8% of global capacity was unavailable due to delays in bottlenecks. Under normal market conditions 2% of the global fleet is not available due to delays. By the end of August this had declined to 7.9% of the global fleet being unavailable. This means that 50% of the capacity which was removed from the market in January had been released back into the market. On a year-on-year basis this means a global capacity growth of approximately 10% in August.

If this pace of improvement continues it implies that the effect of capacity reduction due to bottlenecks will be fully eliminated in Q1 2023.

At the same time, demand continues to be in negative territory. Measuring global demand as TEU*Miles shows a decline of -3.2% for the first seven months of the year compared to the same period last year.

Hence from a fundamental global supply/demand perspective, there is no longer a fleet capacity shortage and the balance is poised to worsen further. This means there is no fundamental support to revert back to the high rates of the last two years, but also that there is no structural support to halt the current rate decline.

There are additional elements playing into the decline.

One element is the bunker fuel price. For cargo moving under contract, changes in fuel price tend to have an impact which is lagged in time as the variable bunker fuel surcharges are most often adjusted quarterly. However, for spot rates the impact tends to be quite immediate. This means that in the period from mid-May 2022 to June 2022, when the price for low-sulphur fuel went up from a plateau of around 950 USD/ton to more than 1100 USD/ton, this acted as a “brake” on the structurally declining spot rates. However, from July and until the start October the fuel price has continued to decline and had by late September dropped below 800 USD/ton equal to the level seen before the Russian invasion of Ukraine. This is a 27% decline in fuel prices which will impact the spot rates in addition to the impact of lower vessel utilization.

Another impact is the sentiment of the customers. It should not be underestimated that many customers harbour negative emotions towards the carriers due to not only the extremely high-rate levels in the past two years, but also from experiences of not being able to book cargo in accordance with agreed contracts but instead having to pay additional fees to get cargo accepted. This is leading to a strong pressure from shippers to renegotiate existing contracts, combined with a clear willingness to not honor contract volumes, in cases where spot rates are quite literally thousands of dollars below the agreed contract rates. 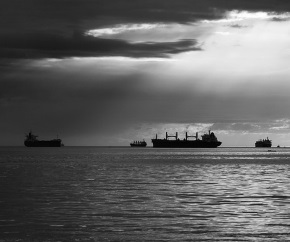 The third impact is that even though hard demand data tend to be lagged in time, the softer anecdotal evidence from the market points to a non-existing peak season and very low utilization in the last period before the Golden Week holiday in China.

This has led to carriers cancelling a large number of vessel sailings for the month of October. With the announcements made up until 30 September this is likely inadequate to stem the rate decline. As an example, the Pacific trade to the US West Coast now has seen the carriers plan to cancel 48 sailings. But for context, October typically sees many cancelled sailings due to the seasonal impact of the Golden Week holiday in China, and last year the carriers cancelled a total of 73 sailings in the same period. Looking at the capacity on offer, the total capacity for October in this trade will see a marginal increase of 0.4% compared to last year.

This means that unless the carriers cancel a substantial amount of capacity in addition to the current announcements, the rate decline is unlikely to stop.

The major risk factor is the fact that there is still no new agreement with the port workers’ union on the US West Coast. The existing agreement expired 30 June and negotiations are still ongoing. The assessment here is that political pressure in the lead up to the US midterm elections is for now keeping a lid on the conflict. But if there is no new agreement after the US midterm elections on 8 November then the risk of a strike on the US West Coast increases substantially. Should this happen it will drastically worsen congestion, not only on the US West Coast, but also on the East Coast as cargo gets re-directed by importers.
Source: Vespucci Maritime, Baltic Exchange