Gulf of Guinea crude oil exports have year-to-date contributed 13.7% of VLCC’s tonne miles demand and 16.5% of Suezmax’s. A 13.5% y/y drop in Nigerian year-to-date crude oil output has been the main drain on demand and caused a 5.9% decline in tonne miles. A further decline in Gulf of Guinea exports can be expected from mid-2023 when Nigeria’s Dangote refinery begins operation – requiring a sizeable portion of the country’s crude oil – and possibly add to rate volatility.

August production figures from the Nigerian government show a drop in output to 972 thousand barrels per day, the lowest in 32 years. This is a 21.5% y/y fall and significantly lower than Nigeria’s OPEC quota of 1,830 thousand barrels per day. Theft from pipelines and underinvestment in oil infrastructure are singled out as the causes for lower output.

In addition to the reduction in crude output, a decline in average haul of roughly 1% has accentuated the drop in tonne miles. Crude oil that would ordinarily go to markets in Asia has been diverted to Europe as the continent looks to substitute Russian oil and improve energy security.

“By mid-2023, the landscape for tankers in Nigeria will change once again as the Dangote refinery is expected to open. The new project has a capacity to refine 650 thousand barrels per day equal to 55.6% of Nigeria’s average year-to-date crude production,” says BIMCO’s Chief Shipping Analyst, Niels Rasmussen. 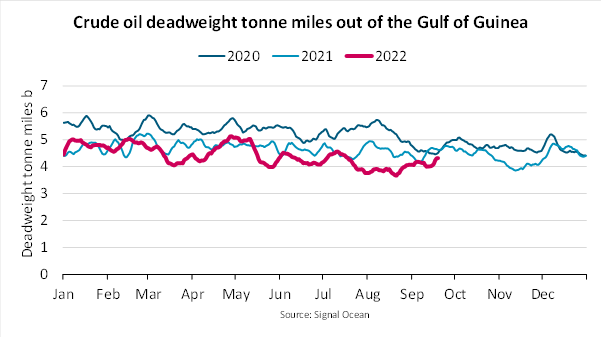 “We can expect the start of operations to bring a further decrease in Nigerian crude oil exports as well as replace gasoline imports even though it may take some time for the refinery to reach full production capacity,” Rasmussen says.

He adds that while the loss of volumes should affect VLCCs, shipments from the Middle East to Europe should mitigate the damage.

“Suezmaxes are currently more dependent on Gulf of Guinea volumes than VLCCs. They are, however, likely to benefit from an increase in average hauls once the EU’s ban on Russian crude takes effect in December 2022. Russian oil will likely be re-routed to Asia,” Rasmussen adds.
Source: BIMCO, By Neils Rasmussen, Chief Shipping Analyst