Wilson Sons is the first company in Latin America to join TIC 4.0


Wilson Sons, Brazil’s leading integrated port and maritime logistics operator, has been selected and approved as a new member of TIC 4.0 (Terminal Industry Committee), which coordinates the 4th industrial revolution in the cargo handling industry. With over 180 years of experience and investing in new technologies and innovation, Wilson Sons is the first company in Latin America to join TIC 4.0, which brings together global terminal operators and manufacturers and suppliers of state-of-the-art port equipment and technology.

TIC 4.0 is an international committee that plays a critical role in fomenting large-scale technological breakthroughs, creating standards for automation blocks, data communication and electronic information at the ports. With automation and digital systems, the incorporation of new technologies reduces manual work and boosts operational efficiency and productivity.

In November last year, Wilson Sons was invited through Tecon Rio Grande, due to its relevance in Brazil and Latin America, its brand’s reputation and investments in automation and digitalization of its container terminals. “With the invitation, we completed an evaluation process where the company was approved at a TIC 4.0 Board Meeting, and thus joined the Committee in July,” says Tecon Rio Grande (RS) Systems Development manager Giovanni Phonlor.

“Innovation and adoption of new technologies are part of Wilson Sons’ DNA. The company’s choice for TIC 4.0, as its first member in Latin America, reflects our visionary character, which makes us pursue higher standards, with increasingly efficient and sustainable operations. With new digital transition solutions, we will overcome all industry challenges while developing maritime transport and creating a better future,” says Wilson Sons COO Arnaldo Calbucci.

Wilson Sons will attend the next TIC 4.0 Board meeting on September 15th in Finland. The meeting will be held both onsite and online and is intended to set new standards and the next technology developments for container terminals. TIC 4.0 has taken many steps forward in technological standardization. Last year, for example, the standards and concepts of activity for container handling equipment and energy sources were published. This year, the data model and standards for terminal operating systems (TOS) and container handling equipment (CHE) were established.

“Standardization of new technologies is instrumental in helping innovation to spread in the industry and companies to raise the bar on efficiency,” says Giovanni, who will attend online the TIC 4.0 meeting on the 15th.

In addition to the presence of global players as Committee members, TIC 4.0 is endorsed by the Federation of European Private Port Operators (Feport) and by the Port Equipment Manufacturers Association (PEMA).

The Rio Grande terminal, the most automated in the country, has been operated by Wilson Sons for 25 years, connecting the south of Brazil with the world, and operating the main container shipping lines calling Brazil. Since 1997, over US$ 275 million have been invested in infrastructure, equipment, training and technology.

Since 2000, Tecon Salvador, a business unit located in the port of the capital of Bahia, has received more than BRL 900 million in investments, BRL 443 million of which in the past two years alone. With the recent berth expansion from 377 to 800 meters, the terminal can simultaneously receive two New Panamax, the world’s largest container ships. The unit continues to invest in dock automation, which makes it more efficient and reinforces its position as an important tool for attracting investment and new business deals to the North and Northeast of Brazil. 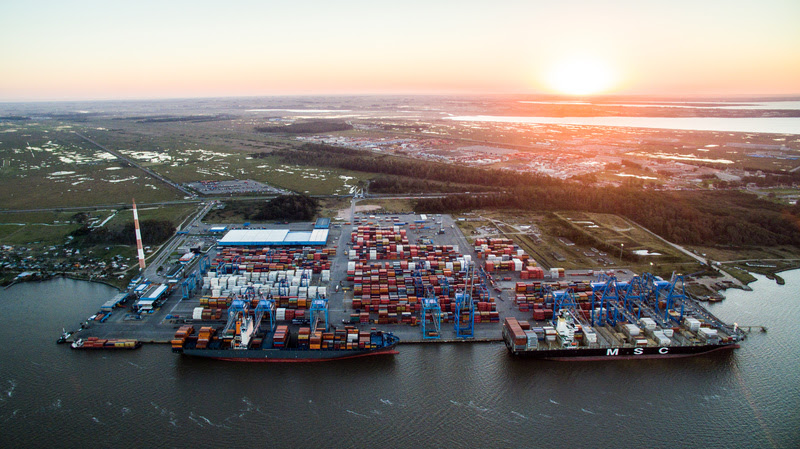 Reaffirming its commitment to new solutions and to fomenting technological entrepreneurship, in July, Wilson Sons launched Latin America’s first maritime and port innovation hub — Cubo Maritime & Port — to make operations more efficient, safe and sustainable. The initiative is part of a whole ecosystem designed to speed up innovation and foster start-ups in the industry. The hub has 12 startups, developing high-impact solutions to increase the efficiency of maritime transport and help the sector to join the low-carbon economy.

Wilson Sons is listed on the Brazilian stock exchange (B3) segment Novo Mercado, which requires high standards of governance. It reiterated its commitment to sustainability by starting, this year, the operation of the first of six new tugboats with a new hull design. WS Centaurus reduces greenhouse gas emissions by up to 14% due to its efficient hydrodynamics. And Tecon Salvador contracted the acquisition of 12 fully electric yard tractors, which will contribute to reducing the company’s carbon footprint.
Source: Wilson Sons