Executive Summary
The European Commission proposed to include maritime shipping in its Emissions Trading System (ETS) in July 2021. The two European ‘co-legislators’, the European Parliament and the EU Council, approved the proposal, putting forward their own positions in June 2022. To give the first clear picture of what each position means for climate ambition, we have undertaken a qualitative and quantitative analysis of each position. In terms of emissions coverage, the largest amount of emissions are at play with the geographical scope and the phase-in. In both cases, the European Parliament’s position would increase coverage by around 154 MtCO2 from 2023 until 2030 compared to the Commission proposal. In contrast, under a worst case scenario, the Council’s position on harmonising geographical scope with a global measure, could decrease emissions coverage by 132 MtCO2. The Council’s position to delay the Commission’s phase-in would also reduce emissions coverage by 93 MtCO2 without credible justification. The Parliament, on the other hand, has proposed to scrap the phase-in to cover an additional 154 MtCO2.

Qualitative analysis demonstrates the prime importance of regulating all relevant greenhouse gases, all ships above 400 GT and offshore vessels. Although the latter exemptions do not account for the biggest quantitative exemptions, their exemption would delay or even undermine decarbonisation, notably by incentivising ships run on Liquified Natural Gas (LNG) and impeding investment in new technologies that are most often tested in small vessels. Exemptions for national circumstances proposed by the Council and Parliament on outermost regions, ice-class ships and islands could exempt up to 7 MtCO2 , 5 MtCO2and 4 MtCO2 between 2023 and 2030. However, these smaller sums hide important qualitative concerns. For instance, the exemption for Public Service Obligations (PSOs) has already been misused by regional governments, to apply to more local ships. The PSO exemption and the exemption for ferries travelling to islands would also exempt the ship types easiest to decarbonise. Comparing each institution’s position in terms of emissions coverage shows that the Council position would amount to a €20 billion giveaway to the shipping sector at current ETS prices (89.80 August 2022), compared to the European Commission’s proposal. The Parliament’s position, on the other hand, would increase revenues by €42.7 billion and, as the qualitative analysis shows, would not lead to negative social impacts. Instead, it would kickstart the long-awaited decarbonisation of the shipping industry.

1. Regulate all greenhouse gases to ensure all relevant greenhouse gas emissions, in particular those of methane-leaking LNG vessels, are accounted for. Similarly, policy-makers should end exemptions for ships below 5,000 GT and other ships types, starting with offshore vessels, without delaying these decisions to review clauses in future years;
2. Scrap the phase-in and exemptions based on national circumstances (the exemption for ice-class ships, for passenger ships to certain islands, for outermost regions and for vessels operating under Public Service Obligations). The phase-in of the ETS, in particular, risks
handing a large, unwarranted subsidy to European business.
3. Optimise climate ambition of geographical scope, ensuring Europe always covers a share of international shipping emissions in the event of the adoption of a market-based measure at the International Maritime Organization (IMO);
4. Direct ETS revenues to the deployment of zero-emission ships through operational subsidies (Carbon Contracts for Difference). 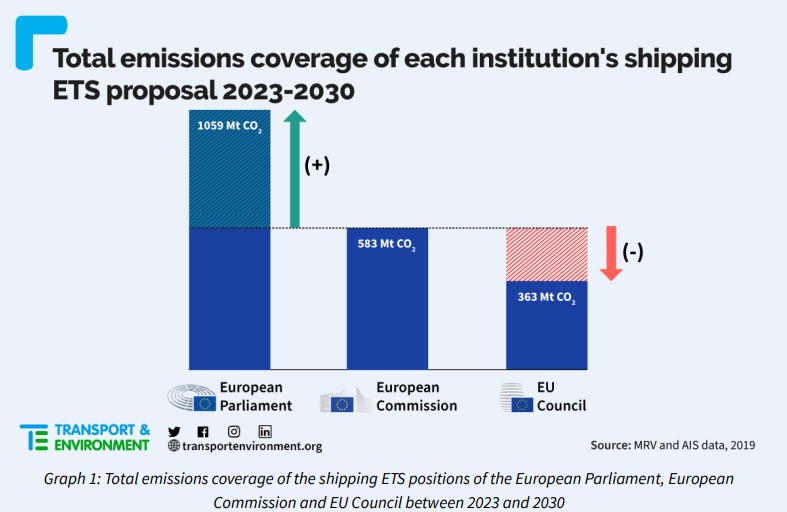 “The Future of Maritime Cybersecurity” – An Exclusive Event for The Greek Shipping...