Call Made By The AMP To The Panamanian Seafarers Concludes Successfully


With the assistance of approximately 300 applicants, including Officers, Cadets and Seafarers, the call made to Panamanian seafarers interested in embarking, ended up successfully, organized by the Panama Maritime Authority (AMP), through the General Directorate of Seafarers (DGGM), in a joint effort with the leading international maritime transport company in the field of general cargo in Colombia, the shipping company NAVESCO, S.A.

This call, according to what was indicated by the shipping company according to its requirements, was directed mainly to First Officers (Deck and Engine), Chief Engineer, AB, Fitter, Cook, with previous experience, however other positions present during the appointment, were also interviewed.

The Administrator of the Panama Maritime Authority, Noriel Arauz, and the Deputy Administrator of the AMP, in charge, Elvia Bustavino, welcomed the attendees, who from early hours came to the facilities of the General Directorate of Seafarers, in the PanCanal Plaza building, Albrook.

The Director of the DGGM, Captain Juan Maltez, indicated that he is very satisfied with the great attendance, since it is a sign of the interest of the Panamanian seafarers to embark and perform functions on board, which will have a positive impact on their families and it will boost the national economy by attracting fresh foreign exchange; in turn, this brings us closer to the goal established in this Administration, that of creating mechanisms to facilitate the hiring of Panamanian seafarers who need to work on board ships, in this case general and bulk cargo.

The General Manager of the shipping company NAVESCO, Guillermo Solano, accompanied by the Director of the Operations Department, Norman Jimenez Espinel, were in charge of interviewing the personnel for the shipments. 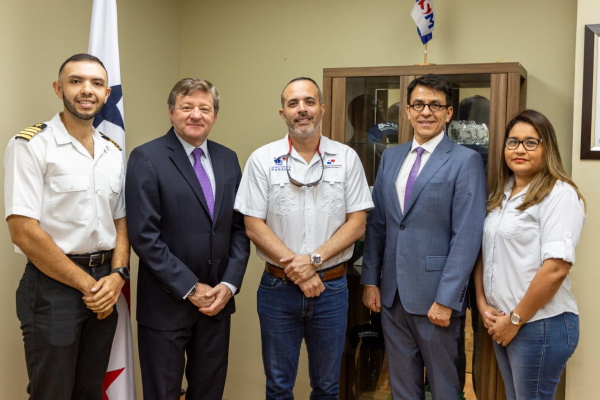 Manager Solano expressed that his visit reinforces the bond created with the AMP, through an Agreement made in March 2020 and that they are pleased with the professionalism and competence shown by the Panamanian seafarers hired on board their ships, being so far, around 40 of them, sailing in their fleet, a figure that they wish to increase, which is why they requested this call.

The President of the Panamanian Association of Naval Officers (APOM), Captain Alberto Herrera, and the Prosecutor of the Association, Captain Aurelio Dutari, were also present, as were the Secretary General and the National Director of Employment of the Ministry of Labor and Work Development (MITRADEL), Winston Ivan Sanchez Aparicio and Alfredo Miter, respectively, who supported the work and reiterated the message to the Panamanian seafarers, that in addition to technical knowledge, it is urgent to strengthen command of the English language as the official language of the maritime industry for security, commercial and labor purposes.

The visit of the top management of the shipping company NAVESCO to Panama, includes a tour of the International Maritime University of Panama (UMIP) and Columbus University, in order to interact with the teaching staff and cadets, to learn more about to the directors, students, teaching staff, as well as the training that is given in these houses of higher education.
NAVESCO is an international company founded in 1980, dedicated to international sea transport and cabotage of solid bulk such as cement, lime, salt, fertilizers, coal, sugar and general cargo such as steel and pipes.

Its activity is mainly carried out in the American continent, especially in the Gulf of Mexico, the Caribbean and Central America, both on the Atlantic and Pacific coasts, the area of operations includes ports in Colombia, Venezuela, Brazil, Argentina, Ecuador, Peru , Chile, Panama, Costa Rica, Salvador, Honduras, Guatemala, Mexico and the United States, for which it uses two (2) vessel sizes: 8,000 DWT and 14,000 DWT, it has twelve (12) vessels, of which nine (9 ) are owned and the others long-term chartered, by English, Dutch and German shipowners.
Source: Panama Maritime Authority

Wartsilä and Capital Gas to partner in greenhouse gas reduction with Fleet Decarbonisation...