Avon-Ohio headquartered APC makes the MarineLINE® protective cargo tank coating, and the new deal follows the successful completion of an earlier contract with Shandong for APC to apply MarineLINE® to eight new 50,000 DWT MR product/chemical tankers to be chartered to Shell for its ‘Shell Project Solar’ programme. That deal saw APC supply MarineLINE® to the New Times Shipbuilding Co Ltd, at the Xingang Port in Jingjiang City and completed in November 2021.

APC President David Keehan says the new agreement will commence in July 2022 again supplying the New Times Shipyard. The latest vessels will also be chartered by Shell as part of Shell Project Solar.

“To win repeat business from Shandong and Shell on this high-profile project is testament to the hard work and effort of all involved,” he said. “Each ship has 20 cargo tanks, including two slop tanks, which require MarineLINE coating, along with application inspection, and full heat curing services. So, this will be an extensive job for our team working with the specialists at New Times Shipbuilding with whom we have developed a close working relationship.”

Mr. Keehan said MarineLINE won a competitive tender to secure the work with Shandong due to have having a range of benefits. 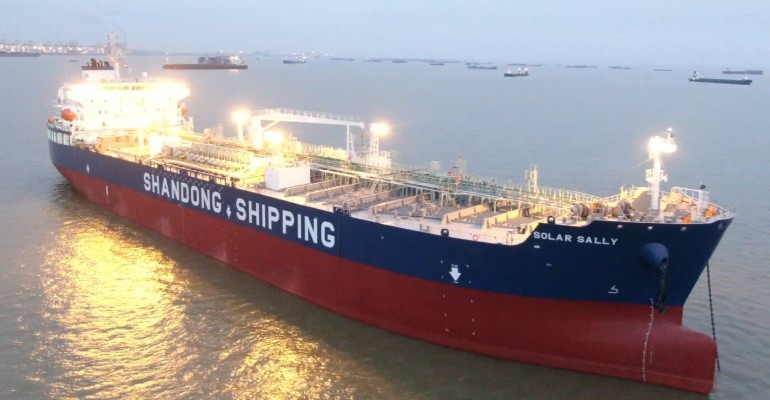 “The low absorption characteristics and highly glossy surface of MarineLINE allow operators to reduce overall tank cleaning times, which in turn reduces fuel consumption and GHG emissions associated with hot water production (see notes to editors),” he said. “This, combined with the cargo versatility and flexibility that MarineLINE offers over its competitors, is giving us a real edge. What we mean by versatility is ease of cleaning between different cargoes, meaning operators can switch grades more frequently and easily, with significantly less risk of cross contamination. These are key advantages in the chemical tanker market, where vessels can be expected to transport a wide variety of chemicals. Furthermore, less tank cleaning directly equates to less tank cleaning slops, and enhanced crew safety based on maintaining rest hours and reducing the need for multiple confined space entries into the cargo tank.”

APC now actively supports washing water analysis (WWA) which allows vessels to continuously optimise their tank cleaning procedures. WWA is also being used by a growing number of commercial interests to replace the wall wash inspection, and this is helping to reduce over-cleaning in linings with the lowest absorption characteristics.

APC recently announced one of its most successful years of trading with maritime sales growing by 40 per cent in 2021. APC reported it now accounts for more than 12 per cent of the global cargo tank coating market and is specified on more than 700 ships, with 56 ships coated equating to over 750,000 square meters of MarineLINE applied in 2021. Exports are underpinning APC’s growth with key markets including China, the Gulf, Croatia, and Turkey.
Source: Advanced Polymer Coatings

Port owners gather to plot a course for decarbonisation, innovation and post-COVID recovery

Crew extinguishes fire on oil tanker in Gulf of Finland