A delegation from the Dutch port of Moerdijk has visited the facilities of the Port of Bilbao, where a meeting was held with representatives of the Port Authority with a view to strengthening ties and deepening commercial relations. The new service launched by W.E.C. Lines in January 2021 has meant that the volume of container traffic between the two ports has increased.

The weekly service, with fixed departure and arrival days, covers most combinations within a week. As a result, W.E.C. Lines provides a reliable logistics service to enable goods trade from road to sea, thereby contributing significantly to the growth of container traffic in the port of Bilbao.

In the course of his visit to the port, the CEO of the Port Authority of Moerdijk, Ferdinand van den Oever, highlighted that “As the fourth national port of the Netherlands and second largest in container trade, we are somewhat of a hidden gem to many. High on sustainability and low on congestion, we feel an affinity with the port of Bilbao in the sense that we represent a combination of European logistic distributors and industry, in our case fine chemicals. Moreover, at Moerdijk we offer multimodal solutions (shortsea, barge, train, road and pipeline connections) which make us an interesting hub for those efficiently trading with both Scandinavia, England, Ireland and the Belgian and German hinterland”. 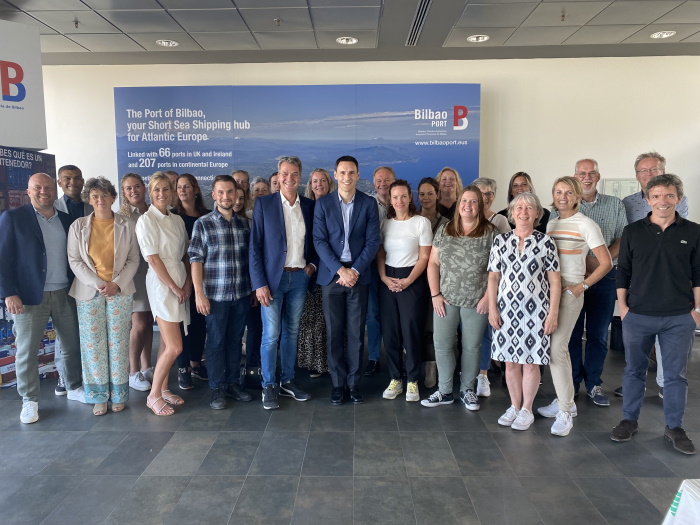 For his part, the Operations, Commercial, Logistics and Strategy Director of the Port Authority of Bilbao, Andima Ormaetxe, emphasised that “what makes this port special, despite it being less well-known than other ports in Holland, is its strategic nature, the fact that it’s well-connected and that it is an important gateway for shippers wanting to get to Northern Europe and to our hinterland. The W.E.C. Lines service has proved this”. He also pointed out that “it is very important for the Port of Bilbao to work in collaboration with other ports with which we are linked by maritime services so as to be in a position to offer ever more efficient and sustainable corridors”.

Likewise, Elsa Conejo, Bilbao Branch Manager of W.E.C. Lines, stated that “after almost two years of service connecting Spain, via Bilbao, with the United Kingdom and Northern Continental Europe, we continue to improve with new rail connections, increasing our container stock and offering door-to-door logistics solutions. Having our continental hub in Moerdijk enables us to reach markets not only in the Netherlands but also in Belgium, Northern France, Germany and Norway, amongst other countries. In the United Kingdom, our direct call at Thamesport, together with those at Immingham, Teesport and Blyth that we serve via Moerdijk, has made us one of the best options in this main market for Spain, covering not only the East coast of the country but also the entire Central and Northern area”.
Source: Port of Bilbao