ITS Logistics released the November forecast for the ITS Logistics US Port/Rail Ramp Freight Index. This month the index reflects the current possible threat of a rail and port strike occurring simultaneously. The November Index reveals that the possible rail strike and Oakland Port labor issues looming over the supply chain industry can in fact cause further disruptions not seen since 2015.

“Overall, most of the U.S. ports and rail ramps are at normal operations, however, the industry is still bracing for a possible strike from both ends,” said Paul Brashier, Vice President, Drayage and Intermodal for ITS Logistics. “The ongoing International Longshore & Warehouse Union (ILWU) and Rail Union labor negotiations could create significant problems to the U.S. supply chain that will impact this holiday season and the months that follow.”

This month, 59% of the members from the International Association of Machinists and Aerospace Workers (IAM), voted to ratify a tentative contract agreement with freight railroads in the United States. The Brotherhood of Maintenance of Way Employees Division (BMWED) also made waves as they extended the timeframe for their status quo period to December 4. Despite the tentative agreements, a rail strike could still occur as soon as December 9, costing the economy an estimated $2 billion per day with significant consequences for the industry. 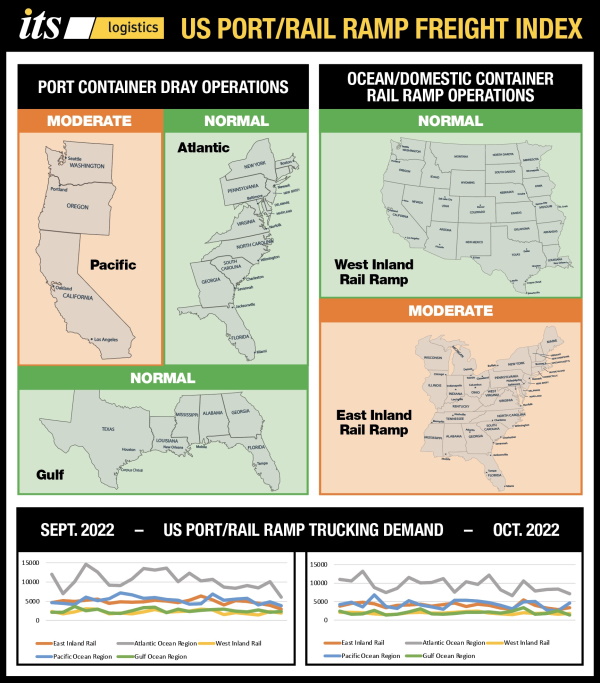 On the port side of the industry, the Port of Oakland recently experienced a strike initiated by longshoremen who were not paid wages on time. Over 200 outstanding wage claims were filed dating back to June of 2022, resulting in businesses doubling down on shipping the bulk of their cargo through the ports on the East and Gulf Coasts. While highly unlikely that a long-term strike will occur, even a shutdown of a couple of days will greatly impact the economy with an estimated loss of $0.5 billion per day.

ITS Logistics provides port and rail drayage services in 22 coastal ports and 30 rail ramps throughout North America. As one of the fastest-growing logistics companies in the United States, the ITS Logistics US Port/Rail Ramp Freight Index provides a forward-looking analysis of port and rail ramp freight movements along with the impact from previous months.

“If the negotiations between the Rail Union and ILWU do not provide an end solution to worker’s frustrations, we could see work slowdowns or even a full work stoppage occur,” continued Brashier. “The labor issues in the West Region are a potential complication, where port workers are fighting for a resolution surrounding automation of port functions and better wages. Slowdowns and disruptions already experienced in the West Region have caused increased volume at the ports on the East and Gulf Coasts.”

The current major headwind forecasted in November is ocean chassis availability in the Oakland Port and East Coast rail ramps, especially in the smaller interior markets. Chassis availability has been impacted due to a lack of distribution centers and warehouses receiving capacity throughout the U.S. The dwell time for ocean containers has also increased, which has resulted in a longer unload process.

Oakland chassis should be normalized throughout November as many chassis’ providers are repositioning chassis from an oversaturated Los Angeles and Long Beach (LA/LB) market.

“There are four remaining unions needing to ratify the current agreement and if that is not done by December 4, there is a good chance that operations will cease,” continued Brashier. “If this is in fact the case, it means that U.S. rail operations and IPI containerized freight can come to a standstill because of the rail labor negotiations being unresolved. Even with this uncertainty though, ocean container rates are the lowest in years and congestion at ocean terminals throughout the U.S. is very low.”

The ITS Logistics US Port/Rail Ramp Freight Index forecasts port container and dray operations for the Pacific, Atlantic, and Gulf regions. Rail ramp activity in both the West Inland and East Inland regions are also highlighted in the index. Visit here for a full comprehensive copy of the index with expected forecasts for the U.S. port and rail ramps.
Source: ITS Logistics

Nokia selected by STI to deploy the first industrial-grade LTE private network in...