According to data from the port authority on Thursday, 277 trucks had entered Paranagua’s reception patio on the 24 hours of Wednesday as traffic gradually resumed.

As of 8:30 a.m. local time, another 155 trucks that were stuck in the blockades caused by the mudslides had arrived to the port, the authority added.

The arrival of trucks come as a relief to exporters of commodities like grains and sugar, who were worried that landslides after heavy rains in southern Brazil could delay shipments and make them pay demurrage costs, which are charged for failing to load a vessel on a pre-agreed schedule.

Starting on Tuesday, landslides on the main access road to Paranagua and Antonina ports cut off access by truck and rail. On another highway in Parana state, the mudslide left dozens missing.

About 80% of goods exported from Paranagua, Brazil’s second-biggest port for grains and sugar, arrive by trucks.
Source: Reuters (Reporting by Ana Mano Editing by Bernadette Baum) 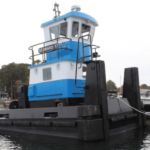