Fire kills one crewmember in the Philippines

April 19, 2022 0 comment
[Summary] The Philippine Coast Guard reports that one sailor was killed while nineteen others along with three contractors were rescued from a burning container ship moored in the central Philippines on Sunday, May 17. . However, three crew members were taken to a local hospital with reports of burn injuries.

Philippine-registered vessel General Romulo of 5,250 dwt is operating an inter-island container service. Reports said the ship was carrying 2,218 tons of general cargo in Manila. The 25-year-old ship built in 1998 has a capacity of 519 TEUs. She departed Manila on 13 April for a normal inter-island cruise and arrived off Talisay City, Cebu and was at anchor when the fire started around 9: 0 a.m. local time.
,
Firefighters continue to cool the ship (Philippine Coast Guard)
,At least five boats responded to the fire and were able to evacuate the ship’s crew. It appears that there was an explosion of a hose in the engine room that caused the fire to spread through the ship’s rest house.

The Coast Guard reports that a survey of the area revealed no oil spills or contamination. They are continuing to cool the boundary to reduce heat on board to prevent the fire from re-igniting. 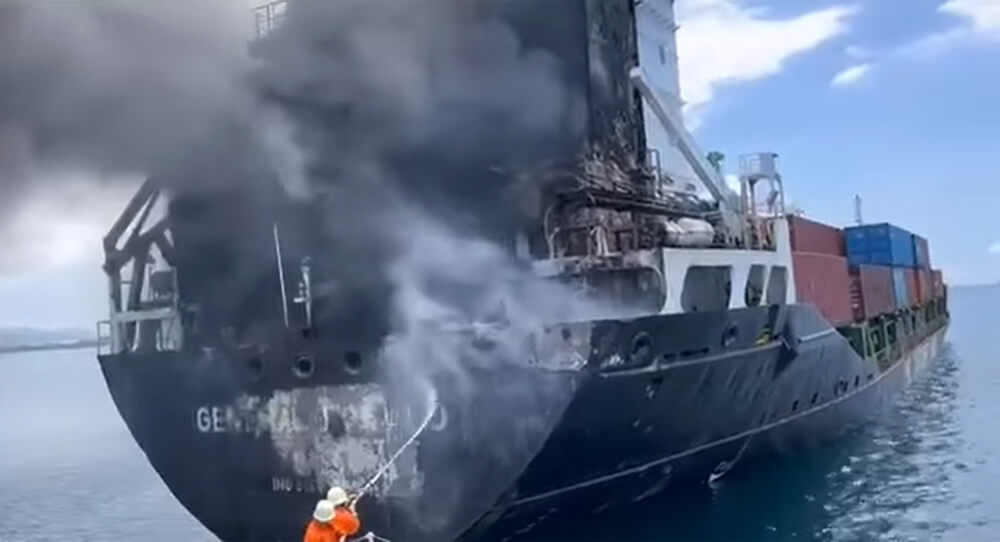 INCIDENT REPORT: The @coastguardph has responded to a fire onboard incident involving M/V General Romulo with 20 crew members onboard at the vicinity waters off Talisay City, Cebu today, 17 April 2022.https://t.co/gpuvLzircK#DOTrPH ????????#CoastGuardPH#MaritimeSectorWorks pic.twitter.com/FdqO3n2fek