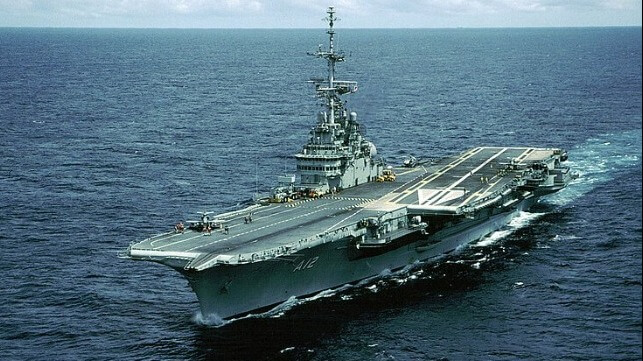 A federal court in Brazil blocked efforts by the Brazilian Navy to dock the decommissioned aircraft carrier NAe São Paulo more than a month after the vessel returned to Brazil in the controversy over its scrapping. Continuing to be labeled a “toxic” ship the carrier is now stranded offshore with the Brazilian media calling it a “ghost ship,” while Brazil’s Navy and environmental agency are once again struggling to come up with a solution.

The court in the state of Pernambuco in northeast Brazil issued an emergency injunction on November 9 after the Navy informed the port of Saupe that it planned to force the docking of the derelict aircraft carrier in the industrial port. The port successfully argued in court that the vessel posed a hazard to the port due to the toxic materials aboard. They cited both the health hazards as well as the poor condition of the vessel after having been idle for four years raising the potential that the carrier might sink at the dock or block the port.

The Brazilian Navy finds itself once again challenged with what to do with the only aircraft carrier in South America while the operator of the tug that has been towing the ship since the beginning of August is demanding a resolution. So far the Alp Centre, an anchor-handling tug registered in the Netherlands, has been ordered to remain offshore. Some reports indicate after approaching Rio de Janeiro when it arrived back in the area, the Alp Centre was told to move the aircraft carrier north toward Saupe. It has been sailing in circles off the port while multiple Brazilian ports have refused to receive the ship.

Local officials are reporting that the tug has fuel, but that the captain asked for a resupply of food and materials for the crew. Some of the crew was also reportedly changed out after having been with the tow since the beginning of August.

The Navy had notified the Saupe Industrial Port on November 8 of its plans to force the docking of the aircraft carrier. They argued that while the vessel does have asbestos aboard it is of no danger to the local community in its current state. The judge, however, found for the port ordering the Navy not to dock the vessel and impose a fine of approximately $18,500 per day if the Navy did not comply and docked the vessel.

The saga of the NAe São Paulo has gone on for nearly three years. Lawyers representing the tug company point out that the initial surveys were done in October 2019 and the vessel complied with all international regulations. In July 2020 the Navy conducted an auction for the recycling of the vessel but only one qualified bidder was accredited for the auction while seven others were found not to be in compliance with the regulations. Turkish shipyard Sök Denizcilik Tic Sti, specializing in ship dismantling was finally selected as the winner in 2021 and they hired MSK Maritime Services & Trading to tow the vessel to Turkey.

Environmentalists protested the sale asserting that the survey was faulty and the ship contains far more dangerous materials than listed in the report. The navy contended that asbestos was removed from the carrier during an overhaul but the environmentalists highlight other materials including cadmium paint on the hull and point out that the vessel originally operated by France had been involved in nuclear tests and could be contaminated with radioactive residues. Turkey agreed demanding an updated survey but by then the vessel was in the middle of the Atlantic. The Turkish Ministry of Environment revoked the import license and the vessel was turned around as it approached Gibraltar.

The carrier is reported sitting approximately 20 miles from the Brazilian coast or 17 nautical miles from the Port of Suape. The tug has been relived by Svitzer tugs so that the Alp Centre could briefly go into port, but it mostly remains offshore waiting for a resolution. At the end of last week, lawyers for the tugboat company threatened to sue the government of Pernambuco contending the tug is consuming as much as 20 tons of fuel unnecessarily because it remains waiting offshore. The reports said they would demand $2 million in a fund to cover their expenses until the dispute to dock the aircraft carrier is resolved.